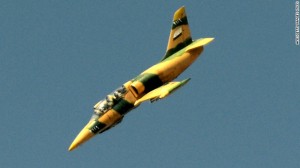 Over the weekend, Turkey shot down a Syrian government fighter jet that had apparently wandered into Turkish airspace. The vitriol from both sides was intense and showed the vast deterioration in the relationship between two countries that in the very recent past were warm with one another.

In Eastern Europe meanwhile, Russia builds up its military close to the Ukrainian border. There has been a great deal of speculation about what Putin plans to do next. Talk of annexing Transnistria, thereby having territory on both sides of the Ukraine from which to attack, has been predicted. Then Moldova gets annexed/invaded/taken over through whichever means seems the easiest when the time comes. And then what? The Baltics? The thought of it is horrifying. And yet not entirely dismissible.

The two scenarios I summarised above are both interlinked in more ways than might at first seem apparent. The Syrian fighter jet that the Turks took out was probably directly or indirectly paid for through Russian funds. Turkey and the Baltic states I mentioned which might be only a few items down on Putin’s checklist (Estonia, Latvia, and Lithuania) are all members of NATO. Which means if they are attacked, the other signatories to the treaty are obliged to come to their defence. So when you look at the world situation at present, we appear to be closer to World War Three than at any time in the last fifty years. Only you’d never have guessed this was the case by the mood throughout Western Europe at present. All of these different theatres are painted in the mainstream media as being a long way away and not particularly relevant to our own lives. Yet it is obvious to me how close to home some of this stuff may land and in the not too distant future as well. Even questions such as what happens to Russian investment in the city if Putin decides to go for it are too close for comfort. Or the problem of where we get our gas from in the same scenario. It wouldn’t take much for the current crisis in Ukraine to directly affect Western European lifestyles.

For what it is worth, I do not think World War Three will be starting any time soon. But even as I type that I think: am I being overly optimistic? Putin does seem pretty hell bent on trying to pull the Soviet Empire back together and the response from western powers so far has not been inspiring. We are so used to a post-Cold War settlement in terms of the way the world functions, I don’t think we can really imagine a complete different set of rules coming into play. Let’s hope we aren’t forced to think of one through the machinations of President Putin.