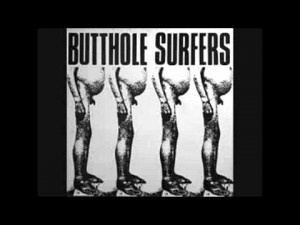 Given the weekend is almost upon us, I thought I’d lighten the tone a little and talk about autocracy. And couple it with what Spin magazine once described as “the worst indie band in the world” in 1993. I should declare in an interest here. In spite of, or perhaps partly because of, the fact that they have been declared the worst band in the universe, the Butthole Surfers are my favourite band of all time. So I decided to ask and then answer a question that has surprisingly never yet been posed: if Vlad the Impaler were a Butthole Surfers album, which one would he be?

I should start, for the uninitiated, by giving you a quick explanation of who the Buttholes (as known by us fans) are. They were formed in San Antonio, Texas in 1981 by two bored accounting students named Gibson “Gibby” Haynes and Paul Leary. They set out to alienate right from the get go. Their live act became infamous, containing as it did overweight, semi-nude dancing, as well as two screens containing episodes of the Brady Bunch twinned with documentary footage of a Swedish sex change operation. When they first played Los Angeles, they braced themselves for the downright hostile reception that every visiting band got at the time from a Tinsel Town crowd. But instead, the L.A. kids stood in stony silence throughout the Butthole’s routine. Apparently, they were too scared to boo.

So I thought the perhaps Putin could be compared to their first release, the EP known as “Pee Pee the Sailor Man”. It begins with the line, “There’s a time to fuck, and a time to crave, but the Shah sleeps in Lee Harvey’s Grave”, before descending into near unlistenable noise. I thought the paranoia, the CIA plotting and the need to offend was very reminiscent of the current Russian president. The next song on the record is called “Hey”, which sounds like Haynes and Leary’s attempt to rip off or make fun of R.E.M. But the EP was released before R.E.M. had really found its sound, so it looks like the influence ran in the opposite direction. Just like Putin holds such all-encompassing influence over those in the “Eurasian orbit”. Whether or not this means that Ilham Aliyev is on the verge of a large arena rock career is a matter for thought.

Or perhaps Vlad is more like “PCPPEP”, which is essentially just the first record over again, this time played in front of a hostile crowd. A bit like the Russian state media’s repetition, drilling messaging into the minds of its viewers, while the western media bleats in the background.  Perhaps the album most like Russia’s leader is “Rembrandt Pussyhorse”, with its deconstruction of the Guess Who’s “American Woman” reflecting Putin’s hatred of western values.

But on reflection, if Vladimir Putin was a Butthole Surfers album, he’d unquestionably be “Locust Abortion Technician”. The album begins with thirty seconds of silence, like the calm before a Russian invasion of one of its old republics, before some strings enter. A boy asks his father, “Daddy, what does regret mean?” The old man responds with, “Well son, the funny thing is it’s better to regret something you have done than something you haven’t done. And by the way, if you see you mother this weekend, will you be sure and tell her…..SATAN!” Regretting inaction is the essentially Putinian ideal.

The album also contains “U.S.S.A.” which consists of Gibby saying “U.S.S.R, U.S.S.A.” over and over again (need I say more?). A song called “Graveyard” and one called “Human Cannonball”. But it’s the closing track that’s the clincher. It’s called “22 Going on 23” and starts with a recording from a radio show (which feels like a genuine piece of reportage) in which a woman who is clearly in her 70’s states that she has had trouble sleeping recently due to a violent incident. The host asks the woman her age and she responds with the title of the track. It’s this idea that I think most closely aligns with modern Russia; the idea that if you’re 70 years of age and you want to pretend you are 22, go for it. The truth is what you make it. You know for all of Putin’s raging against the west, he does co-op some of its worst traits: the greed, the lust for power, the advertising machine, the desire to bring back the past, the lust for eternal youth.

In conclusion, I don’t know if Vladimir Putin whips out “Locust Abortion Technician” before laying his head on his Kremlin scented pillow every night. But if doesn’t, he really should.