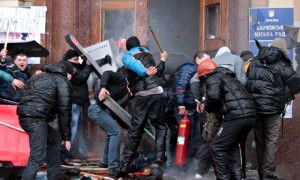 The reason given by Putin for his stationing of Russian troops on the border with Ukraine is his deep, abiding concern for the Russian people, in whatever nation they live in. At least according to him. This ethos has even been given a name, the very obvious “Putin doctrine”. One of Putin’s spokespeople, Dmitri Peskov, said on Russian state television last month that: “Putin is probably the main guarantor of the safety of the Russian world.” I’d like to call Putin’s bluff on this one. Because I don’t think the president cares very much about his people at all, if we can judge him by his actions.

Putin wants Ukraine back at all costs. This includes the possibility of sanctions that would harm his people considerably. And all to keep in his sphere of influence a very poor country that will require a great deal of financial help from whomever it chooses at its partners. This economic cost has the potential to do more damage to the Russian people than any quasi-imperialist acquisition of territory could ever possibly make up for. Also, there’s an inherent flaw in the design here. If Ukraine and Russia are indistinguishable, as many of Putin’s people assert, doesn’t fighting the Ukrainians mean, in their own sense of these things, fighting against Russians? This is the Putin doctrine eating itself.

It seems to me that what Putin is really interested in is personal glory first and foremost. He cares about the Russian people in the abstract; some poetic, otherworldly ideal of what the Russia people are. His concern about the real life Russophones is illusory. Like all despots, he confuses his own personal glory with that of the people he has chosen to speak on behalf of. People are comparing Putin to Hitler, which is extremely hyperbolic and premature at best, but the same strain of personal triumphalism disguised very thinly as nationalism is something they both share.

I worry about the perceptions of these things as they stand in the west; I read a piece on the Guardian website today which described Putin’s regime as “neo-liberal”. Whatever you think of neo-liberal economics and whatever you think of Putin, describing the current Russian economic system thus is misleading at best. Putin operates a sort of state capitalism that is not a million miles away from what the Chinese are currently using. Which really, really isn’t neo-liberal – in fact, calling it a market economy in any sense is incorrect. I’ve also read on the same site about the West’s so called “imperialist interest” in Ukraine. Have we come to a point where if people of a certain nation want liberal democracy for themselves, and the west supports them in an indirect way, particularly in a poor country where there is no immediate gain to the west for supporting it, that can be described as imperialist? If so, I really worry about where we are as a society. No wonder our leaders are so tied up in knots about what to do in Ukraine – they are simply mirroring our own confusion.