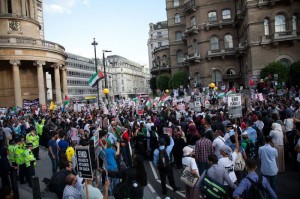 I don’t mean the title literally, so relax. It’s just that it is interesting to see how a situation like the one in Gaza manifests itself in a cosmopolitan city like London. On Saturday, there was a pro-Palestine rally held in the West End. The way the event has been covered in the UK media is striking, with there being a distinct left/right axis to the way its various write-ups read. The Spectator talked about it as an openly anti-Semitic affair, while the Indy focused on the “pro-Israel” bias of the BBC coverage of the conflict. The right seems to support Israel regardless, the left the Palestinians, albeit less rigidly.

I find every side of it upsetting. I’ve hesitated to discuss the situation in Gaza up until now, mostly because the parameters of the whole thing are so horrific. My train of thought on the “Middle East Problem” probably falls into a different category than what seems to be most people’s: I am neither pro or anti-Palestine, nor pro or anti-Israel. I’d just like the killing to stop as soon as possible. And I think we’ve come to a point where it is safe to say that the actors directly involved in the conflict are not rational enough to bring the slaughter to a halt any time soon. Problem is, the alternatives are all very tricky to say the least.

My principle problem with Israel is that it is essentially a state that exists for one group of people of a particular race and faith. As a pluralist, I find this hard to get excited about. It is a functioning democracy, yes, but one that rests on the idea of the land being set aside for a certain particular group to the exclusion of all others. But I also get implicitly that there are now a group of people who live between Upper Galilee and the Gulf of Aqaba who are surrounded on all sides by nations who are hostile to their existence. Whatever one thinks about Israel in the abstract, the idea of Jews being subjected to mass murder again is too horrific to contemplate. Thus, America protects Israel absolutely.

Even when, and this is where it starts to get difficult, Israel acts in a belligerent way that isn’t good for its long term interests. Understandable in some ways for a group of people that feel under siege, the Israelis have a tendency to overreact militarily and then claim they had no other alternative. The blind spots are obvious: the Israeli government’s own press team states that only half those killed in the offensive in Gaza are innocent citizens, without seeming to realise that half sounds like a quite a bit indeed.

Taking the Spectator article as a prime example, it seems it has become harder and harder for anyone who takes umbrage with the actions of the Israeli state to be seen as anything other than anti-Semitic. I don’t know, I wasn’t there on Saturday, and maybe on the ground things were said or a vibe was evident that doesn’t come across in the pictures. But it doesn’t seem like it was a festival of Jew hating. This conflagration between Israel and Jews in general has to stop; surely one should be able to criticise a nation state without it being considered racist.

And yet, and yet. There are a great deal of people who are upset with Israel for directly anti-Semitic reasons. And yes, there are quite of lot of those in their neighbourhood who want to push Israel into the sea. So we end up right back where we started.

Many times while writing this, I thought of abandoning ship. Why write about Gaza, since you’ll only get abuse from one side or the other (or possibly both)? But it just felt too much like giving up on eight million people. I think if the Israelis can’t see the fact that coming to a two-state solution is in their own self-interests, then America has to somehow force the situation. How, I don’t know. The nuclear option (openly withdrawing unquestioning military support) is unthinkable. But surely there must be some other way of using the State Department’s soft power that hasn’t already been tried? A one-state solution only works if there is power sharing, and we feel a long way from that. The status quo has been shown, once again, to be unsustainable. There are those who will say that the Palestinians always kill the deal when it comes close to being achievable. If that’s the case, take the basis of the two-state solution and say that it’s going to happen with or without their input. I have a feeling Hamas would listen then, whether with a held nose or not.

The saying goes that if the Arabs lay down their arms, there is peace; if the Israelis lay down their arms, they are destroyed. Ignoring the simplification of a complex situation, there is some truth to that. But there are plenty of proactive things the Israelis could do, right now. Stop building settlements in the West Bank, as a for instance. And figure out some way to make the Gaza situation bearable for the citizens of the enclave, who essentially live in a large, outdoor prison. If they made some moves on their own initiative, perhaps the Israelis would be able to combat anti-Israeli sentiment in the people they live in fear of, surely the real goal if long term peace and stability is to be achieved.

As for the Palestinians, they could aim to do everything from their end to put a halt to the appalling conditions in Gaza first of all, single-mindedly, and then second of all show they are willing to do whatever they can on their end to help a two-state solution to become reality. Stop firing rockets into southern Israel too, it isn’t helping. Sure, the sympathies of certain sections of the West are plucked when the Israelis retaliate, but it ultimately gets you no further towards your ultimate aim. It’s also attempted murder, not an insignificant point to consider. Finally, realise that if you show willing and unity, a two-state solution will be hard to resist forever.

I know all of this is easier said than done. But if we don’t keep saying these things, particularly at a time like this, then all hope really is lost.