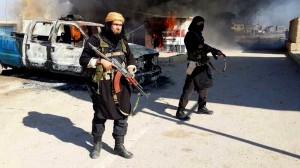 As someone who is a member of a small pot of people arguing for military intervention in Syria, pretty much since the civil war there kicked off in2011, hearing this week that the UK government is finally getting serious about trying to tackle a problem that has spun so wildly out of hand, i.e. ISIL, is brilliant news. However, I am concerned about the tone of the debate at the moment, as if Britain does get militarily involved (and it is looking very likely, with both Miliband and Cameron making statements to that effect) it has to be done decisively and hopefully with as little intervention as is necessary to win. As I say, some of the talk going round at present leads me to fear this may not be the case.

“I think the legitimacy of action being taken in Syria would be better to have a UN security council resolution,” Ed Miliband told the Guardian when asked about whether Britain should limit its action to Iraq or to include Syria as well. To adopt this approach would be suicide, and it is clear the Americans won’t be, thankfully. ISIL has shown, in both action and words, that it does not respect the border between Iraq and Syria whatsoever. In fact, that border in particular, being the result of the Sykes-Picot agreement, has specific significance as a symbol of western carelessness in the Middle East to those fighting for the Islamic State. So if British action were limited to Iraq, we would be caught in a situation in which all ISIL has to do is try and draw our planes back to Syria, where an invisible barrier would exist. In this scenario, you just have a much more concentrated ISIL force, now with Iraqi re-enforcements, in Syria. This would make the situation in that country much worse. It is the equivalent of taking the rubbish in your frontgarden and putting in your backgarden, where there was already plenty of rubbish to start with.

Miliband’s quote speaks of a refusal to deal with the Syrian situation in Britain, and even the American strikes there aren’t being done with a view to finally sorting out the Syrian problem as a whole. Trying to contain the problems of the Middle East within the borders of Syria is both unspeakably cruel to inflict upon the already suffering Syrian people – and it also won’t work. Lebanon is already struggling with the Syrian situation, in terms of refugees, in terms of igniting its own re-emerging partisan issues. Pushing ISIL out of Iraq and into Syria alone will exacerbate this situation, no question.

If the UK is going to get militarily involved in the ISIL situation, it must be with the aim to end ISIL as a threat altogether. Simply moving them from one part of the region to another, making them more concentrated in places where there is much too much of them already, will only amplify the whole conflict, and who knows, perhaps in the long term even make ISIL stronger. There must be a holistic approach.