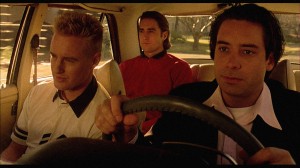 About twenty years ago, a young Texan upstart named Wes Anderson managed to convince a major studio to give him the money to make a film about a bunch of misfits who try and become professional thieves yet fail miserably. To star two brothers who had never been in anything before. Impressive, but partially due to nature of the indie film world at the time; if you wanted to be an auteur, the 1990’s were the golden era. In the early part of that decade, the Sundance Film Festival struggled to get enough submissions to fill the forty or fifty odd screening slots they had. For comparison, these days Sundance gets around twenty thousand submissions to fill the same number of slots. Of course, it is the rise of the camcorder that did it, making would be directors out of people who’d probably be selling hoovers door-to-door otherwise.

Anderson had managed to get a fairly poorly made short film starring those two brothers into Sundance in 1994. Those two brothers being Owen and Luke Wilson. It was from this that “Bottle Rocket” got signed. Anderson was asked at the first meeting with the studio what sort of budget he was looking for. He said half a million, thinking he was asking for the moon. He panicked when the film executives started to laugh; perhaps he’d disastrously overshot? Once they calmed down enough to speak, one of them said the cheapest budgets they did were five million.

And so “Bottle Rocket” was improbably created. The thinking around Wes Anderson tends to fall into two distinct camps. One holds that he went on to make masterpieces like “Rushmore” and “The Royal Tennenbaums”, and “Bottle Rocket” was a charming yet amateur effort, the early work of a budding master. The other camp thinks everything the lanky Texan has ever made is overrated rubbish. I am in neither. I am partial to his films while being mindful of their flaws. I also think that “Bottle Rocket” is easily his best work.

The film’s protagonist is Anthony, played by Luke Wilson, a guy who is sort of terminally depressed and has no idea what he wants from life. He is buoyed by his sidekick, Dignan (played by Owen Wilson – the first of many examples of the two Wilsons being in a film together in which they are not playing brothers). Dignan is the opposite of Anthony; he is full of ideas about what he wants from life, even going so far as to make himself a seventy-five year plan. He manages to convince Anthony and their friend, the brilliantly named Robert Mapplethorpe (although they all call him Bob), to rip off the local library. Dignan’s reasons for wanting to do this are unclear. Anthony and Bob (whom one gets the sense Dignan and Anthony only pal around with because he is rich and has a great house to lounge around in and plot useless heists from) voice their concerns, such as the fact that libraries hardly keep any money on hand. But they both go along with Dignan’s silly plan anyhow. It can be summarised thus: just before going into the library to steal the paltry amounts kept within, Dignan places a piece of sellotape across his nose. Anthony then asks him why he’s just done this. Dignan smiles, points to his friend and says, “Exactly!”

They go “on the lam”, which is mostly just Dignan, Anthony and Bob driving around parts of Texas, the tiny amount of money they managed to get from the library “job” quickly dwindling to nothing. Throughout, Dignan indulges in all of his “Bonnie and Clyde” fantasies to his friends’ constant consternation. At one point Anthony gets frustrated and asks Dignan what the plan is now. The ringmaster simply puts on a pair of Ray-Bans and says, “On the run from Johnny Law. Ain’t no trip to Cleveland, baby.”

Eventually they all head back into town (which is never made explicit, but one assumes to be Dallas/Ft Worth) and no one there even notices they were ever gone and no official complaint to the police appears to have been made in regards to the money they took from the library. They drift apart for a while and Anthony gets a job landscaping. One day, Dignan approaches him while wearing a yellow jumpsuit and tells Anthony he has a new plan for making them rich. It involves ripping off some factory a little ways out of town. Dignan says he got the idea from a new friend he’s made, a local gangster named Mr Henry who seems to have taken Dignan under his wing. Anthony is about to say he isn’t interested when fate intervenes. Bob’s bullying brother, known for some reason throughout the film as Future Man, drives up and makes fun of Dignan and his outfit. As Future Man drives off, leaving Dignan a miserable, yellow heap, Anthony tells him he’ll help him with his latest, bound to fail quest for supervillainy on three conditions: one, Dignan comes up with the plan (this one’s obviously just a sweetener to perk Dignan up again); two, Bob’s on the team, something Dignan reluctantly agrees to; and three: “You gotta get me one of those jumpsuits”.

So they go ahead with their plan and it, of course, fails utterly. They enlist several would be criminals who are even more useless than the three boys are (Applejack, for instance, a safe cracker who cannot crack safes). Turns out Mr Henry was only interested in getting all of the friends in one place at the same time so that he could rip off Bob’s house. Everyone escapes from the police except for Dignan, who ends up in prison. The ending is Bob and Anthony going to visit him in the Big House, Dignan still dreaming his big dreams, his seventy-five year plan intact, at least in his own fevered imagination.

I guess part of the reason I love “Bottle Rocket” so much is that all of the characters remind a great deal of the people who I grew up with (like Dignan, many are now mostly incarcerated). The difference between people like Anthony, who submit to the idea that life holds very little for them, and Dignan, who simply cannot accept that fact and do everything to live out their little dreams, is the heart of the movie. And the film never decides which one is superior to the other. Yes, Anthony isn’t in prison at the end, but Dignan still has his fantasy bubble intact. Is it better to be free and dead inside or physically caged yet retain hope? The film also just has a great, hard to describe vibe about it. Like you sense that they named the character Robert Mapplethorpe because the actor’s name is Robert Musgrave and it was some sort of inside joke amongst the little group who made the film.

What emerges from interviews with cast and crew is that apparently there is a two and a half hour “director’s cut” of the movie, complete with Applejack’s plate spinning routine, background on exactly why “Future Man” is thus called and many other treats. If only more than sixteen people liked the film (although one of them to be fair is Scorcese, who said “Bottle Rocket” was one of the ten best films of the 90’s) then perhaps “Bottle Rocket Redux” could hit the cineplexes. Who knows, maybe I’d even go to the cinema again.