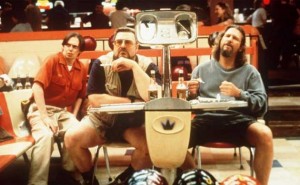 The title sounds a little provocative, as if I’m questioning the Dude’s greatness. I’m not; “The Big Lebowski” is one of my favourite films of all time. But I’ve heard a lot of crap over the years about why exactly it’s so great, so I feel the time has come to set the record straight.

What most people think they love about the Coen Brothers’ crowning achievement, what they mistakenly feel brings them back over and over and over again, is the combination of the far out characters/situations married with the brilliant dialogue. Make no mistake about it, “Lebowski” has unforgettable scenes and people to spare, and as far as dialogue goes, no film ever made touches it. I was going to try and site some great examples – until I realised I’d have to quote the entire goddamn movie. Some people think it’s all the profanity, but that’s not it either. None of these things make “The Big Lebowski” what it is.

The core attraction of the movie is the relationship between the Dude and Walter. It is, beyond any shadow of a doubt, the greatest portrayal of male friendship ever put on screen. In fact, I can’t begin to think of what would come in second, the central Lebowski one is so far ahead of everything else. Most male-male friendships in cinema are either simply a perfunctory result/engine of the plot or directly homoerotic. Think about man-woman or woman-woman friendships on screen throughout the ages, and then do the same for man-man ones and you’ll immediately see what I mean.

The Dude and Walter need each other. And I do mean need – if the friendship were to end for any reason, both of them would be in serious trouble very quickly. Walter is an extremely difficult man to get along with, prone to semi-random outbursts of violence. As a result, most people are scared of him and dance around him, something that makes Walter feel more alienated and thus more violent. The exception to this is the Dude, who never tolerates any of Walter’s shit without direct comment. The Dude is never even slightly afraid to tell his friend, “Walter, you’re being an asshole”. Walter needs this for a myriad of reasons: he needs someone to keep him and his temper in check and he knows it; he requires genuine interaction with another male (his divorce and its repercussions, not to mention his whole personality, alienate him from women completely), one which is give and take in a genuine sense, not just someone saying something to Walter to placate him. When Walter takes out the pistol right in the bowling alley and threatens to shoot Smokey, everyone is rightly freaked out. Except the Dude, of course. He sits there, as calm as you like, and says nonchalantly, “Put the piece away, Walter, they’re calling the cops”. The Dude then even berates Walter on the way back out to the car park about the incident (“Waving a fucking gun around!)

The Dude, on the other hand, needs Walter because he requires the other man’s energy and impetus. Without Walter, the Dude would quickly lose all contact with society and indeed almost all other people. The Dude requires, in the most literal sense, Walter calling him up, cajoling him down to the bowling alley, suggesting action as opposed to the Dude’s default inertia. The Dude must know that taking Walter along on the money drop is a bad idea, and yet he cannot help himself; he knows that facing some strange German kidnappers without his externalised Id by his side would be too much to bear.

I think this is also why a higher proportion of men like “The Big Lebowski” over women. Don’t get me wrong, lots of women love the movie; it’s just that you have to admit, dudes tend to be more liable to love the film. I think it’s because of the Dude-Walter thing and its utter maleness that makes this the case. Also, the fact that men on the whole can’t bring themselves to see this/admit this is an interesting facet of its enduring cult popularity. The whole blokes and their emotions thing, you know the routine.

Anyhow, I’ve probably just ruined “The Big Lebowski” for a certain group of guys for all time now. They thought they liked Jesus Quintana and Jackie Treehorn, but now that I’ve pointed it out to them that the film they adore is really just a touching story about two middle-aged men and their need for one another, the world will never be the same again. Sorry, chaps. I guess we all have to grow up sometime. It’s either that or, ironically enough, end up like either Walter or the Dude.