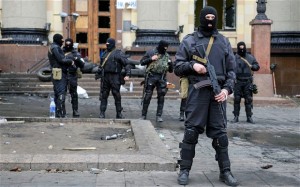 Over the weekend, several towns in eastern Ukraine were taken over by “pro-Russian militias”, including Sloviansk, Kramatorsk, and Druzhkovka. I put the militias bit in quotations due to there being a lot of scepticism on the ground about just how grassroots these uprisings were. Many of the fighters for the pro-Russian cause were sporting fairly notable St Petersburg accents according to witnesses. It appears that the invasion, by stealth, of eastern Ukraine by Russia is underway. That the Russians continue to deny any culpability for these uprisings while simultaneously building up the numbers of troops they have on the border demonstrates their methods: they are making fun of the west, using our terminology, methods and legalese against us.

As a permanent member of the UN Security Council, Russia are incredibly well placed in all of this. You need to look no further than the meeting of the Council last night. Russia was able to put forward its narrative at the highest level of global order. The “neo-Nazis” and “anti-Semites” who run Ukraine are in the midst of creating some sort of pogrom against Russian speakers in the east of the country. Any attempts to counteract Russian aggression will be described by the Putinists as Ukrainian aggression – amazing gall when Russia has, using poorly disguised proxies, taken over several Ukrainian towns.

Problem is, Russia is simply echoing lines trumpeted by western governments for the last two decades and thus our attempts to fight against them come across to many as hypocritical. If we can invade Iraq with no aggression towards its neighbours in evidence and only some flimsy idea of the threat it poses as the pretence for regime change, then what moral authority do these same governments have in saying that what Russia is doing is wrong? We spent our capital in the wrong places and at the wrong time ten, fifteen years ago and it is all coming back to haunt us. The fact that we were pushed into that place by violent jihadists doesn’t make that better – in fact, it makes it worse.

But we are where we are and it is becoming harder and harder to imagine Russia not invading the whole of eastern Ukraine, bit by bit, using the same methods we saw over the weekend, all on the basis of “protecting Russians from harm”. Then comes Russian takeover of Transnistria and then western Ukraine is surrounded by Russian troops. The key factors to consider now are how the Kiev government, which is a work in progress for the time being, responds to Russian aggression; and how the west responds as well. Bear in mind the phony referendums that will be on their way, the patina of faux democracy meant to legitimatise it all. What will the west do? At the moment, despite some strong words about the actuality of what Russia is currently doing in the Ukraine, which are welcome, we still seem to be hiding out heads in our hands, hoping it will all go away. It won’t. We will be called upon to act, sooner rather than later. Western leaders will be required to demonstrate a foreign policy policy nous mostly absent thus far this century.