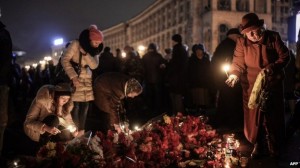 For the time being, the reformers seem to have won in Ukraine. Yanukovych has fled Kiev and the parliament has deposed him in his absence; a warrant has been put out for the ex-president’s arrest. A new presidential election for May 25th has been called. So far, the only response from Russia has been to recall its ambassador to Moscow and send Medvedev into the fray, the Prime Minister giving the expected lines about how the new government in Kiev is illegitimate. I was glad to see Dmitri’s face spewing the narrative as opposed to Putin himself, since the fact that the president of Russia wishes to remain in the shadows for the time being is a positive omen for peace, at least in the short term. But logic and history tell us we could be seeing something a lot stronger from Putin in the near future.

The Russian President has always seen the Ukraine as a territory in his quasi-Empire; an absolutely crucial one at that given the history of the two nations. It is hard to imagine he is going to see the reverse of the last week as permanent and simply get on with his life. He will have ideas on how to get Ukraine “back” already. There remains the “nuclear” option (not nuclear in the literal sense I hasten to add – when we’re talking about Russia and its arsenal, this becomes important to be made clear).

The eastern part of Ukraine is mostly Russian speaking. However, given the fact that Yanukovych was unable to even escape the country without being stopped by border guards while in this part of Ukraine, it is extremely unlikely that some sort of civil war is going to take place – without outside interference, which is what the world should be watching for. The nuclear option I mentioned above would involve Putin trying to get Russian troops and weapons into eastern Ukraine on the hush and then have them retake Kiev as part of a “revolutionary force trying to reclaim the executive for the rightfully elected president of Ukraine”. This army will be made to look as internal and devoid of any foreign elements as possible. It may sound farfetched to some, but why wouldn’t Putin be at least contemplating the logistics of this if he’s serious about keeping Ukraine in his grip? One must also remember Georgia in 2008 – Putin is not averse to using force if the situation, in his mind anyhow, calls for it.

The real question is how will the west respond should this take place? The past year has been a bad one for western powers letting Putin get his way. We saw it most pronouncedly in the Syria negotiations. If Putin invades Ukraine while straight-facedly denying that he is doing so, what will the western response be? In the short term, whatever Russia decides to do next, we should all accept the obvious: Putin will not now give Ukraine the promised $15 billion. That was always an obvious payoff for Yanukovych’s obedience in regards to the EU deal. Given this, the timing of the IMF’s proposed bailout of the Ukrainian economy becomes key. The next week could be crucial for the survival of the new government in Kiev.