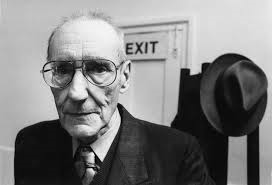 My two year old daughter has become obsessed with a terrible book she found in amongst the volumes we put upon her shelves; it is from the 1970’s and is filled with “cute quotes” from small children, many of which are crushingly outdated, such as “You tell me to use my imagination – then you hit me for lying!” or “I’m not stupid – my ears are too short!” Being asked to read her this throwback to the days when child abuse was kosher enough to joke about started to wear a little thin, so I came up with a way to keep myself sane: I started to read the book in a William S Burroughs voice. This seemed to work for both of us; I found reading the quotes more pleasant, my daughter thought it was amusing.

Some might blanch at the notion of exposing a small child to anything even tangentially related to William S Burroughs. He tends to get described as a negative influence, particularly on the young and impressionable. The drugs, the hanging out in dodgy places, the nihilism of much of his writing, not to mention the at least implied pederasty. I get it. However, as someone who grew up with the slightest of suicidal edges, I can tell you that the author of Naked Lunch is a very positive influence in one respect: he makes old age, and by extension the aging process, seem cool in a way that no one else ever has.

William S Burroughs was the odd one out amongst the Beats. He was from a wealthy family, which made a large difference; it would have been almost impossible for him to have built up the chip on the shoulder that Kerouac had given his upbringing, and thus for his life to have played out in the same, sad spiral downwards way. Burroughs’ writing is free from the self-pity that often lingers in the work of guys like Ginsberg and Ferlinghetti. Young artistic types tend to gravitate towards Burroughs, however repulsed or at least nonplussed by his writing they are, because his lifestyle in many ways is the dream one for those within this group: an ability to travel with impunity due to a trust fund, with the freedom to simply create whatever comes to mind with no need to worry about how to make a living from it.

This fantasy imagining of the Burroughs lifestyle, of course, has all of the darkness removed from it. Excised of all of the, what one can imagine was extreme loneliness he must have experienced a lot of the time. The way that his wife died as a for instance, for those of you familiar with the “William Tell” story (gloriously brought to life in David Cronenberg’s film version of Naked Lunch). If his life had been such a bed of roses, he wouldn’t have felt the need to escape it with heroin after all.

Burroughs was careful enough to avoid the political clichés that were rife throughout his productive life. He never went in for Stalinism, much to his credit, much less fall victim to putting his name to some ill thought out artists’ manifesto. He was much too interested in his own inner demons, and his writing remains relevant at least partly for this reason.

I myself am not at all interested in replicating any part of Burroughs life other than elements of the very last bit of it. Basically, I want to be like Burroughs when I hit pensionable age; having hip indie bands, or whatever the 2042 equivalent of such a thing is, wanting me to do a spoken word bit to give them cred; to still have the ability to outrage, to shock, to amaze, and to do so better than most of the youngsters on account of having seen more, experienced more, without the downsides of life having ground me down. This seems a great target to aim for as one grows older, something that has the benefit of revolving around activity as opposed to being stationery, a natural problem for everyone as they grow older.

I appreciate I have a mountain to climb to get to that place by the time I’m seventy, but everyone’s got to have a dream. In the meantime, if you have wee ones yourself, I do recommend the reading of a book in a Burroughs voice trick. It does make whatever you are being forced to read for the literally one hundred and fifty-eighth time a lot more fun.