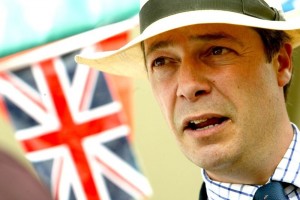 I’m no libertarian. I believe fundamentally in the freedom of the individual, but I do not think the state need always be the bad guy in this equation. For instance, I quite like having an NHS. Furthermore, I feel that having a health service makes me more, not less free as an individual. The fact that I don’t have to worry about going bankrupt in my old age if I happen to get ill at the wrong time is important to me. As is the fact that should I wish to pack in my job and start my own small business, I can do so without risking not only my own wellbeing but that of my children as well.

But as a liberal, I recognise certain libertarian instincts. And thinking about these in depth has led me to believe that while being a liberal and a nationalist at the same time is very difficult, being a libertarian and a nationalist at the same time is completely impossible. Why is this important at the moment? Because Nigel Farage and indeed his whole United Kingdom Independence Party project sets out to be both at once. And I think the project may be doomed for this reason, or at very least the problems we are seeing at present can be traced back to this paradox.

Within libertarianism, the individual is all encompassing and the state the enemy. National governments should not even exist in this mindset. There should be a minimal, preferably as local as possible, group that polices towns and regions and the only reason to have a national construct at all is to provide military protection. Whereas to a nationalist, the nation state is everything.  It is worth the individual sacrificing the lives of himself and his children for. National identity is the most important thing in the world, beyond business, beyond the well being of the family unit even in the nationalist ideology.

Let’s take a practical example of where this conflict becomes apparent. Say I run a small business. If I were a libertarian, I would want to hire the best people at the cheapest rate and such an equation would be my only consideration. Why should I begin to care where the people who work for me originally came from? I only care about my own business and I should be allowed to hire whomever I like with no restrictions from the pesky, should-be-done-away-with-anyhow government. But as a nationalist, I would be called upon to put British jobs before anything else. If the nation state is worth everything then it must come before my little business, surely.

So in the Europe debate it plays out like so: a true libertarian would argue that Romanians and Bulgarians coming to Britain to work is the beauty of the market on display. They get more money than they would at home, and I get to hire them at a cheaper rate than the locals. Everyone wins. Except the locals, obviously. But who cares? They have nothing to do with me, right? As for the argument that these people will mooch off the public services paid for with my taxes, well, as a libertarian I would think that all public services, apart from the police and the military, should be done away with as a matter of course. So no conflict there then.

I’m being harsh on UKIP by singling them out at the start of this piece; this is a fundamental problem for almost every right wing party across the globe. Because the free market simply doesn’t care about national borders. In fact, they are normally a great hindrance to it. Does the Right care more about neo-liberal economics or more about keeping immigration down in the name of nationalism? For too long, they have been allowed to get away with playing both sides of the fence. So I’m calling them on it.