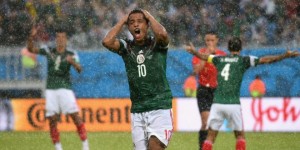 The story for me, so far in this very young World Cup, is the amount of officiating howlers we have had already. The Brazil penalty was bad enough. But in the first fifteen minutes of the Mexico v Cameroon match, two clear and fair goals were denied by erroneous officiating. What was worse is that they were both at one end. Also the second error, a header from a corner, was one of the worst football officiating mistakes I have ever seen, ever. I have watched a grand total of two football matches all year coming into this tournament, and even I was able to spot the fact that the ball had come off a Cameroon defender before dos Santos put it in the back of the net, clearly and unmistakably, in real time.

Now, the end result wasn’t directly affected as Mexico won the match 1-0 anyhow. But what if the positions at the end of the group stages come down to goal difference and Mexico just loses out? Then there will be a clear example of a place in the second round being directly affected by a couple of bad calls.

I’m not suggesting anything corrupt is going on. Or that officials aren’t entitled to a mistake here and there. But two hideous linesman calls in the first fifteen minutes of a World Cup finals match is really unacceptable. It makes a mockery of the whole thing.

The other story thus far is the Dutch demolition of World Champs Spain last night, 5-1. I missed all of the Netherlander second half goals. I left the room for fifteen minutes to deal with something domestic and when I came back the score was rugby like all of a sudden. I can say from there that the Dutch looked like constantly scoring, with the Spanish unable to even get hold of the ball, never mind do anything with it. Is this a sign that Spain aren’t that good? Or that the Netherlands team is brilliant? Like any of these kinds of questions, only time will tell.

England v Italy tonight. I don’t know if I can bear watching until 1 AM as England go ahead early on a great goal and then spend the rest of the match running around like headless chickens as the Italians run rampant. Perhaps I’m being overly pessimistic. All I know is that I think I’m getting to old to watch England play late night World Cup matches. My heart can’t take it anymore.