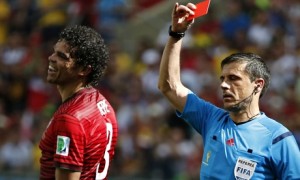 So England lost to Italy. This was not wholly unexpected, at least to those of us who live within the boundaries of reality. There was a lot of talk afterwards about how England weren’t that bad, actually, that there was a lot to build on. I suppose I see their point. It wasn’t the mauling some of us feared. Still, watching Pirlo bestride the pitch like the Rhodes of Colossus come to life, dominating midfield throughout, was worrying. England don’t have anyone like that at the moment, although if Gerrard ups his game perhaps there’s some hope.

The fans like to say, and so thus the newspapers indulge in the same gossip, that one of the reasons England tends to “underperform” at international tournaments is because the players don’t want it badly enough. That in the age of multi-million pound contracts, wearing the Three Lions seems a bit passé to a lot of these chaps. I have always thought this was crap. The players obviously care a great deal about playing for England and the reason that the team doesn’t do all that well is because the players aren’t, by international standards anyhow, generally all that good.

The exception, however, is Rooney. I really think he doesn’t actually like playing for England at all. He’s a hot and cold player at club level anyhow, but it has been a long time since he was anything other than pants in an England shirt. He wanders around the pitch wearing the face of a little boy whose ice cream cone has been prematurely taken away, running here, running there, all the while having an uncanny ability to be nowhere near the ball at all times. The few times he does get near it, his touch appears to be that of an arthritic septuagenarian who plays in a league for pensioners at the weekend who gets stuck at left back where it is hoped by his aged teammates that he will not fuck up too egregiously.

Some pundits say that he was played out of position on the left, that he needs to be stuck up front, in your classic Alan Shearer position. I have a better idea. Let’s put Rooney where he belongs. On the bench.

Anyhow, now England must beat Uruguay on Thursday to give us any chance of remaining in the tournament past the group stage. Already there has been some daft talk, with Sturridge claiming that England “have no fear of Suarez”. That’s either a lie or a sign of rank stupidity. A good first half from Luis will sink England. However, I choose to remain positive. England to get a scrappy 1-0 win this eve. But as I wrote that, I got an uneasy feeling in my gut.

Half time yesterday of the Germany v Portugal match, which in case you missed it resulted in Germany mauling their Iberian rivals 4-0, witnessed a wonderful barney, with Adrian Chiles and Lee Dixon having it out with Patrick Viera and Fabio Cannavaro on the topic of the Pepe sending off. Chiles and Dixon were resolute in the idea that the Germans had cheated, and that some unspecified but preferably medieval punishment should be doled out to the entire squad. Chiles was practically foaming at the mouth. Meanwhile, Cannavaro was perplexed, wondering for what was probably the hundredth time in his life why the English get so wound up about stuff like this. Viera had this “here’s why England will never win the World Cup” smile on throughout.

So good luck on Thursday, England – you’re going to need it.