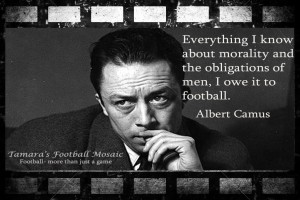 Apologies to start off with for being quiescent this past week; I was on holiday with the family, in France. There are so many things about France I adore, but chief amongst them is the fact that despite only being twenty-two miles distant, the place feels a world away from England. At one point we were shopping in a supermarket and as we approached the checkout, it began to hail outside. Hard.

“Like small peas hitting my soul,” was the way the checkout woman described the sound of the stones hitting the window overhead (Comme les petits pois frapper mon âme). As quickly as it started, the storm passed. The checkout woman offered us another poetic observation: “Le silence comme la grave”. I don’t know about you, but if the person cashing up my food at a supermarket in England said anything remotely like this to me, I’d probably suspect that they were slightly mad. In France, however, it seemed completely normal, expected even.

In my original prediction for the World Cup rounds, I foretold that France would go out in the first round. Whoops. This was one amongst many of many gazes into the crystal ball that in hindsight looks foggy. Now that the French have managed to get to the next round with flying colours, I’m going to go the whole hog and predict them to get past Nigeria this evening and into the quarters. Watch: now they’ll lose 5-0, comme les petit pois frapper mon blogpost.

We can all agree that Brazil v Chile was a classic, football magic from start to finish as Alan Partridge might have put it. Quick paced, end to end, both sides completely going for it, the match showcased what is great about South American football. I found myself cheering on Chile, partly because they were the underdogs, partly because of Roberto Bolaño. In the end it came down to penalties and what by that point felt like the inevitable host nation victory. But it was fun there for a bit.

I saw Netherlands v Mexico while on the ferry back to England, so I missed great swathes of it. Like the Mexican goal, as a for instance. I did clearly see the Robben dive at the end for the winner however. And make no mistake about my choice of words there – that was a Klinsmann worthy tumble. I did love Robben’s line afterwards about diving; that he dove, but not when it led to the winning penalty, just earlier in the match. It felt a bit like when Bill Clinton told the world that he’d once smoked marijuana but hadn’t inhaled. Poor Mexico anyhow – they seem eternally cursed in this competition.

While we were in France, I told my daughter that we were now in Albert Camus’ homeland (she has a bit of a thing for the author of L’Estranger). She instantly corrected me: “No, dad – Albert Camus is from Algeria” (note the present tense. She’s two and a half and therefore everything is very present, including dead writers of philosophic treatises). Camus was a great lover of the great game (see quote above) and was a noted goalkeeper, incidentally. Made me wonder if perhaps, in this World Cup of twists and turns, the North Africans are going to squeeze past Germany this eve. But no, hardly; like predictions that Costa Rica are going to win it all, reality will soon come crashing in as a corrective. Although many of my initial predictions have been proven to be fallacious, we’re still on course for a Brazil v Argentina final. Plus ça change, plus c’est la même chose.