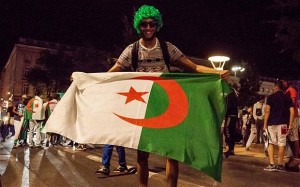 So the second round of the World Cup has concluded. This officially ends the “shitloads of matches on all the time” portion of the programme; there are only seven games left in the entire tournament, eight if you include the third place match. I suppose they theoretically increase in quality from here – although this is not always the case. This “best ever World Cup” needs a decent ending, so let us live in hope.

My impression of the France v Nigeria match was that it was unfeasibly brutal. This was at least partly because I was busy doing other things while the match was being played and it seemed like every time I came back in the room to catch up with it, someone was lying on the pitch with a damaged limb. It probably wasn’t that bad and my impression is simply the result of an obscured viewpoint on the whole thing. In the end, France won handily, 2-0, no real surprise.

After trying for long stretches of the match to lose, Germany finally pulled their collective finger out and beat Algeria to advance to the quarters to face their next-door neighbours. Who they will beat, incidentally – yes, France have looked the better side, but this is Germany we’re talking about. In the World Cup, they tend to look great at first, then wobbly, then solidly unbeatable. Anticipate a very Teutonic 1-0 win on Friday. But I don’t think they’ll go any further this time round.

More interesting than the match itself was the way that the Arabic world collectively cheered on the Algerians. Old enemies like Egypt rallied to their neighbour’s side, flags waved in the streets of Cairo even. There were riots there last time the Algerians were in town – it is often remarkable how events conspire to create odd bedfellows. Alliance is such a febrile thing.

Last night, the plucky Americans went out to Belgium. Or so the story goes. Actually, Belgium would have tonked them had it not been for the goalkeeping genius of Tim Howard, who saved a record number of saves in a World Cup finals match. The numbers only tell part of the story though, as anyone who watched the match can testify; highlights of the match should be built around each acrobatic stop by the Everton keeper. So well done to the plucky Tim Howard then.

The Swiss tried to park the bus and managed to do so for one hundred and seventeen minutes before Argentina finally scored. And as it so often is with these things, it was the man who had been the worst player on the pitch by miles, Angel Di Marta, the chap who had stunk up the stadium for the previous couple hours with drunken pub league level stuff, who scored what was an impressive winner. People say that the match showed that Argentina are not on course to win the tournament; I heartily disagree. Winning in those circumstances, with your worst player scoring the winner in the death throes of extra-time, is the true mark of a champion.