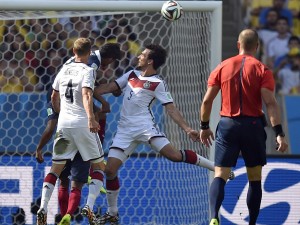 In my initial World Cup prediction, I said the semi-finals would be Brazil v Germany and Argentina v Spain. All right, I was completely wrong about Spain, but I got the rest spot on, not to mention the fact that my Brazil v Argentina final is still on – and looking more and more likely. My forecast that Neymar would swing in the stunning pass that would set up the first goal will not come true, sadly, as the great man now lies on a bed with a broken back. Some have said his loss spells an end to Brazil’s progression in the tournament, as Germany will now beat them. I don’t think so. If this was an all-time great German team perhaps, but it isn’t – they are simply workmanlike and well organised, as German international sides always are. There are no superstars, and I think you’d need at least one to get past Brazil in a World Cup semi-final in Brazil.

Looking back at the quarters, all the matches were pretty decent if their results fairly predictable. They seemed to follow a pattern: brilliant goal early on (Hummels’ header, Higuain’s lovely technique, although poor Belgian defending deserves some credit there), followed by periods of stalemate broken up by manic end to end action, goals only prevented through brilliant goalkeeping. Speaking of keepers, who else thought that it was weird for the Netherlands to sub out their starting keeper in order to put in a lieutenant for the purposes of penalties? At that point I sort of wanted Van Gaal to be proven wrong – as usual he wasn’t. Anyhow, good luck to the Dutch, who will certainly need it to get past Messi and his mates and into the final.

This has been my first World Cup since having children and as a result watching entire matches uninterrupted has been a challenge. There’s always a part of the routine that does not fit in with the Amazon Time Zone. I suppose one can look at it as an investment for later, when they’re older – a time in my life when I can say, “Honey, I know there are probably better things to be doing right now but little Monty has his heart set on watching Paraguay v Saudi Arabia in its entirety. What’s a daddy to do?”

So detailed semi-final prediction is as follows. Brazil 0 Germany 0 in normal time, with Brazil to score a stunner in extra-time. Argentina 2 Netherlands 0, with the second goal to be scored late in the match by a drunken Argentinian fan in a replica shirt who will be mistaken by Sabella for some River Plate up and comer. But they’ll be through, and that’s all anyone celebrating in the streets of Buenos Aires will care about.