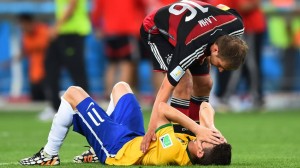 Last night was one of those matches that every football fan will be able to recall exactly where they were when they saw it unfold. I was in the House of Commons, at a work function, and the match was twenty minutes in already when I started to get edgy to see what was happening. My phone had died and so I had no means of checking the score. I asked an MP I know if he liked football, more in hope than anything else. He looked stunned and answered in the negative, but knew what I was after. He gained me entrance to Strangers and I as I walked into the Commons bar I thought I was hallucinating. BRA 0 GER 4 read the scoreline. As it sunk in that four-nil really was the state of the match, I began to enunciate my shock. “Four fucking nil?!” I shouted several times over. I heard laughing in front of me. Turns out I was standing right in front of a table full of Tory MPs, including several ministers of state. They clearly found my stupefaction highly amusing. I imagine they felt what one would have having five minutes previous witnessed a clown who was on fire run in front of them, only to be saved from further skin burns by the Thames bursting through the window via the visible hand of God, and then watched the reaction of the first person to walk into the room and see the aftermath.

It is a result that makes you feel good about supporting England – for once. However badly England have done in numerous football tournaments, we’ve never been subjected to what the Brazilian fans were last night. That was one of the most one sided matches I’ve ever seen, and I’ve sat through my share of Arsenal v Toyota Office Workers Team B FA Cup matches over the years. The fact that it was a World Cup semi-final match, and that the team getting royally dicked over were the hosts, only added to the unbelievability of the spectacle.

So now every person with a shred of sanity is predicting a German win in the final. And even though my credibility in such matters should obviously be questioned following my forecast that there was no way Brazil were going to lose last night, I am going to go out on a limb and stick with my original prediction on the winner of the tournament. In other words, I still think Argentina are going to emerge as champions come Sunday night.

My rationale for this is that I favour a South American team to win and I also remain convinced that Messi will make the difference. But I’ll find myself in a weird place watching the final, in that I will, I think for the first time ever, be cheering on the Germans. After last night, let’s face it, they deserve it. Also, for a European side to win the World Cup in Brazil, having beaten the host nation 7-1, would be an achievement surpassing any I can think of in the history of football. There’s been a lot of talk about how this is the greatest World Cup ever and I wasn’t totally sure, until last night made me think that those touting this line may be right. If Germany wins it all, it would definitely be so.