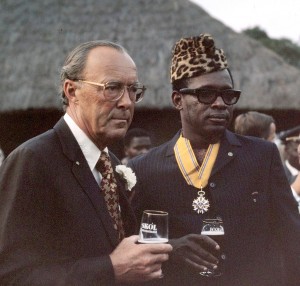 Zaire was a weird place to say the least. The Belgians, when they ruled the country, called the capital city Leopoldville, after the Belgian king. Domiano Ndege, during his brief reign, called it Africana. He thought that one day he’d rule all of Africa from the place, the deluded narcissist. Mobutu ended that dream real quick like. Whenever a misguided moron manages to get his hands on power, some ruthless bastard will take it from him. See Stalin/Trotsky or Napoleon/Mirabeau for historically relevant examples. Nowadays, the capital of Zaire is called Kinshasa.

Mobuto and his thugs don’t usually take kindly to strangers, particularly white foreign strangers, poking their nose into things. However when they discovered that I was searching for Felice Ndege, a person that was an official enemy of the state and someone the Zaire government asked to have put on the FBI’s Most Wanted List (no dice; the Feds weren’t getting involved in extradition of US citizens to African despots), and that I was in no uncertain terms looking for her because I thought she was a criminal, I was welcomed with open arms.

In fact, on my second day in the country a couple of large African gentlemen appeared at my hotel one afternoon and told me that the Right Honourable Mobuto desired my personal presence for lunch that particular afternoon. Not that I would have refused of course, but it was obvious that this wasn’t a polite request: I was going to the palace either in a suit or in chains. Driving through Kinshasa with those thugs, the flags of Zaire flying off the radio aerials, I could see just how tight a grip Mobuto had on the Congo. Pictures of the man adorned every shop window; every street corner had a representation of the man, either hanging from the lamp posts or on the side of the mail boxes; it was his country, make no mistake about that.

So there I found myself, sitting in the foyer of the most ridiculous building I have ever been in, the official palace of Zaire, waiting to speak to Mobutu, one of the world’s most infamous dictators. The hallway in which I was deposited to await the master of Africa’s heart was as adorned with portraits of Mobutu as the rest of the country he dominated. He didn’t keep me waiting very long, which surprised me; in my experience, despots like to have you cool your spurs for an unnecessary period of time before you are allowed to see them, just to make sure you know who’s the boss, like. When he appeared in front of me, my first thought was that he’s a small man in terms of both stature and body mass but is equipped with a sort of all conquering charisma that makes him seem both much taller and much wider. The kind of guy it’s hard to take your eyes off of when he’s in front of you.

I took the hand he offered me to shake. It felt like I had dipped my fingers into a vat of warm milk.

He then turned around and walked over to a small record player that was sat in the corner of the room. Once there he took out an LP out of its non-descript sleeve and placed it on the turntable. He then very deliberately put the needle down upon the album. A strange song erupted from speakers that until this point I hadn’t noticed were there (my detective skills are fading badly these days, I’m embarrassed to say). Mobuto glided back across the room and sat in a chair at a thirty-degree angle to the left of me.

The diminutive despot remained silent for a minute or so, during which I felt it was best to remain quiet myself. In Zaire, everything happens when Mobuto says it does, so I figured I would wait and let him break the ice when he felt it appropriate.

“Excuse me, Your Highness?”

“They are a rock group from Birmingham, England. Do you like them?”

I finally figured out that what he was referring to was the music he had put on. Truth is, I don’t really like very much popular music made after about 1963 (The Beatles ruined rock n’ roll in my opinion) except for jazz, if you are willing to count that. However, as Mobuto had put it on, I didn’t want to offend him unnecessarily.

“It is quite nice,” was the best I could manage.

“It is very clear that you do not like it,” Mobuto said in a voice that was impossible to read, and I could feel a lump develop in my throat. I had offended the guy already, without asking him a single question regarding Felice. Mobutu got up and glided (that’s the only way to describe it; that’s how he moves) slowly over to the record player again. When he got there he whipped the needle off the vinyl and promptly took it off the turntable, threw it to the ground and stomped the record into a million pieces. Then he turned towards me and said:

“What kind of music do you like, Mr. Sellers?”

I figured I had no choice but to be honest.

“You don’t have any albums by The Ventures, do you?”

Mobuto put his finger in the air and then turned away from me and back towards the record player. He looked through a little stack of albums to the side of the device, took one out and placed it on the player. Putting the needle down, I heard “Walk, Don’t Run” erupt from the speakers. I involuntarily smiled.

Mobuto, seeing me suddenly pleased, grinned himself as he glided back over towards me. As he sat back down in his chair he said, “I like to make my guests feel as comfortable as possible.”

We listened to an entire side of The Ventures LP; neither of us spoke a peep the whole time. As the final tune faded out (a blistering version of “Honky Tonk” I can still recall in full), the needle skipping in and out of the final groove, Mobuto broke the silence between us.

“You think you know where Felice Ndege might be?”

“I’ve done a lot of research and I feel like I’m closing in. I’ve got a few possibilities; but here in Kinshasa was Felice’s fork in the road. She may have gone onto several places when she left the city. So that’s why I came: to find out which road Felice took.”

Mobuto nodded, seemingly taking everything I was telling him in very deeply.

“Do you think she is still with Ndege?” he asked me.

It took me a moment to focus; he means Domiano, the guy she married here after The Count bought it.

“I doubt it; Felice has a tendency to jump from guy to guy. If I really thought she was still with Domiano Ndege she’d be a lot easier to track down. But I don’t think Ndege is hiding her away someplace. That wouldn’t be her style to be out of the limelight like that.”

“I imagine you are interested in finding Felice yourself?”

It’s an obvious question but one that had gone unasked up until that moment.

“Truth be told, I thought you perhaps had some new information about Ndege that we were unaware of. That was my principle interest in you, Mr Sellers.”

Mobutu got up and walked back over to the record player again.

“But it seems that is not the case,” the dictator said without turning back around. It was clear we weren’t going to remain pen pals after I left.

Of course, I had to wait to be dismissed by Mobuto, which took another two hours, during which time Mobuto played more records and danced by himself, in the middle of the floor. The music during this time period was awful, some sort of Soweto-funk fusion garbage. Eventually, I was given my leave. In the end I find myself grateful that Mobuto is kind enough to have one of his drivers drop me back at the hotel, so that I don’t have to face trying to walk though Kinshasa at night, a vulnerable, foreign white man, alone.

Strangely enough having just said all of that, after I found I couldn’t sleep that night, I decided to take my chances out on the street. There are a lot of drugs floating around Kinshasa, despite the ever present police presence. I saw a young girl, couldn’t have been older than thirteen, fourteen at the most, lying on the ground, unconscious. She had a hypodermic needle sticking out of her arm. It took me instantly back to L.A., early 50’s, Lance and I, all of that heroin we ran, all of the bad karma we racked up. And man it came back on us. Lance in the form of his untimely death. Me having to go on without him, now dragging my ass across the face of the Earth in search of his killer so I could answer the question that burned in the back of my brain every night, keeping me awake most of them: why? Why did Felice kill Lance Digby?

The rest of my time in Kinshasa was full of nothing but dead ends. Without Mobuto’s interest in finding Felice, I found myself basically wasting my time in Zaire. Domiano Ndege is currently in Liberia, where he is nominally in charge. I wanted to avoid going there until I knew whether or not he and Felice were still together, but a visit now seemed all but unavoidable. Head Office agrees and soon enough I find myself on a flight to Monrovia, hoping I’m not executed first thing upon arrival.