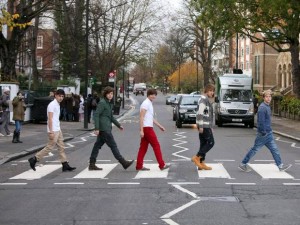 Yesterday morning, in the wee hours in fact (how rock and roll), Zayn Malik of the boy band One Direction tweeted the following: #FreePalestine. This caused a shitstorm on Twitter, with many of the group’s following signalling their approval by favouring or retweeting – but also a healthy number expressing deep discontent at the action. As you can imagine, many of the One Directionistas in Israel were less than impressed.

But I have to take my hat off to the lad, if for nothing else simply being in a boy band and yet still expressing a controversial opinion. The Israel-Palestine conflict is not one I’d choose a side on, but it is nice to see the idol of many impressionable minds taking a stand on something, anything.

Some with a keen eye for pop cultural history might say this was the beginning of something. In the mid-1960’s, bands who had previously maintained a squeaky clean image suddenly started to grow their hair long and take mind altering chemicals. The pot thing has already happened with the Uno Direzione crew, so that’s taken care of. But more importantly, these 60’s bands became politically engaged, talking about their dislike of the Vietnam War they had hitherto kept their traps shut about. And so we come to Zayn’s tweet. The circle is now complete.

The question now is, when can we expect One Direction’s version of “Revolver”? In 1966, the Beatles released an album full of unexpected twists and turns; some real downer tunes about old ladies dying; a song with musique concrete poured on top of it about the LSD-25 experience; a bad Motown rip (okay, perhaps that one was less notable). Is a pop revolution just around the corner?

I’d like to get my hopes up, truly I would. There are, however, several snags to this actually coming to fruition. For a start none of the members of One Direction plays an instrument as far as I’m aware, so creating a whole new sound for themselves would be sort of difficult. On the other hand, we do live in a technologically advanced and postmodern musical age, so there are keyboards and sampling old records at their disposal.  Their rather extreme literal mindedness is a barrier as well. Not very artsy. To remind you, this is a group that had a single entitled “The Best Song Ever”. You can just imagine the board meeting when the suits thought that one up.

“We want a song that conveys the message that this is, like the best song ever.”

“So call it something like, ‘The Best Song Ever’, but just not quite so fucking obvious.”

“We can’t think of anything. Our lateral minds have deteriorated to such a point we can only think in strictly immediate terms.”

So we may have to suffer through a One Direction album called “This Is The One Where We Try And Go All Sophisticated On Yo’ Ass” if things don’t improve in that department.

Still, encouraging signs are there. Having campaigned alongside the yoofs a few times in recent memory, I can say that on the whole they like the concept of pop music as political commentary. So note to suits: market value in this idea. Drop the literal crap, hire some creatives who are somewhat creative, and study the Beatles output, 1966-70. Last time I checked they may have a sold a record or two in their day. And once again, well done to Zayn Malik for having the balls to say something, whatever you may think of the position taken. I talk a lot about rock and roll being dead on here, but perhaps, just perhaps, I can look forward to One Direction’s conceptual masterpiece, “The Album That Tries to Sound like Late Period Beatles, Updated For a 21st Century Audience” sometime in the near future. I can’t wait.