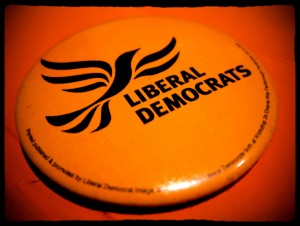 I wrote an article last week about the problems a Lib-Lab coalition might face were it to ever come into being. As I’d hoped, I got some interesting responses. Although I say this explicitly in the article itself, I will reiterate the fact that if such a coalition came into being I would wholeheartedly support it and hope it worked brilliantly. I just have my doubts that would be the case. But the debate gave me pause for thought about other possibilities.

I got a comment back that said: “But the Tories and us are on different planets, too, surely?” I couldn’t really disagree – we’ve seen as much in government with them. Worse, having been through that government with the Tories, we’ve seemingly exhausted everything we could possibly do with them already. Let’s say there is another hung parliament and the Conservatives are the largest party again. What could the Lib Dems and the Tories possibly agree to do with each other that’s not already been done? Mostly, another coalition with the Conservatives would seem to be one of token agreements – mansion tax and local government PR for an In/Out referendum, for instance (the EU referendum would have to be the minimum price for any agreement with the Tories. Is this something we want to do? It’s worth considering our position on carefully).

This leads to us to somewhat of an existential crisis. To summarise, we might think coalition is a great idea, but if none of the other parties are willing to give it a go, it makes putting our beliefs into action a bit tricky.

This isn’t to say I don’t belief pitching ourselves as the moderating influence against the extremes of the two parties isn’t the right one for 2015. It’s just that it’s hard to know where this will lead us. And that’s slightly terrifying. I suppose there are more than a few scary things about 2015 to look forward to, but this is certainly amongst them.

As I said in my Lib-Lab article though, perhaps the sheer pragmatism of politicians is what will see us through. Cameron would need us to get the referendum he requires to remain leader of the Conservative Party (in an irony not at all grasped by Tory backbenchers, they would need us to get their coveted EU referendum, as it would certainly be impossible to get through parliament in a minority administration). Miliband would need us to stop Unite ripping the Labour Party to smithereens. So we do have our own cards to play in that situation. Let’s hope we use them wisely.