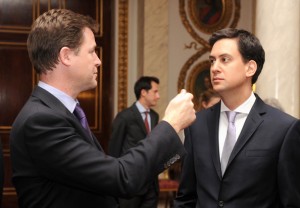 The next election, everyone who talks about these things often will concede, is a very, very tough one to call. The Conservatives seem to have going for them the fact that economic confidence is growing, and this is usually a decider for incumbent governments. But Labour have been ahead in the polls for more than two years now, so if the Tories are going to push ahead it had better happen for them sometime soon. We saw them get a bump in the polls post-budget; that predictably fell back within a few weeks and now we’re back to Labour leads of four or five points.

So with this in mind, I turn my attentions to the possibility of a Lib-Lab coalition. I am putting aside the likelihood of this taking place (like I said, 2015 is a doozy to call) and simply examining what I think are the problems such a project would face even getting off the ground and once there what difficulties it would encounter just trying to stay afloat. George Eaton has written in the Times about how many areas of agreement Labour and the Lib Dems have in terms of policy. While I don’t disagree with him, I think there is a whole other side of the coin to examine. Which I will do now. I’ve split the problems into five main areas.

Personal Animosity Between the Two Parties

In a weird sort of way, this may be the least problematic of the five problems I’m about to discuss to overcome, for the simple reason that all politicians are pragmatists at heart. But it’s still a problem. Labour have spent the last four years making Nick Clegg into a Goldstein figure and telling Lib Dem members they are personally responsible for destroying the NHS; meanwhile, the Lib Dem frontbench have blamed most of the world’s ills on the previous Labour government. It is hard to just brush all this aside, whatever the political realities of the moment, and climb into bed with each other.

Under the current coalition, there have been efforts made to ensure that both parties are relatively happy with the economic policy. While this has not always been successful (the public disagreement about the top rate of tax in 2012 springs to mind), it has always been an obvious aim of the government. This would not be the case in a Lib-Lab coalition from day one because of one Rt Hon Edward Balls of Morley and Outwood. Once installed as Chancellor of the Exchequer, Balls would declare himself Lord God King of the UK economy and listen to precisely no one on anything, barring his own personally selected advisers. The idea that Balls would have any truck with Vince Cable, or Danny Alexander or David Laws or whomever else the Lib Dems stuff into the Treasury is ludicrous and goes against the grain of Balls entire professional history. He would wall up Number 11 as a personal fortress, just like his mentor Gordon Brown did. Without any part to play in economic policy, how comfortable would the Lib Dems be in this government?

So you’ve got Balls in his castle in Number 11, listening to no one, and then over here you’ve got the Lib Dems shouting at Ed in one ear and the unions (coming up next, by the way) in the other. How would Miliband respond to this scenario? If what we’ve seen of his leadership so far is any indication, essentially he would bury his head in the sand and hope everything resolves itself one way or another. One could even imagine a situation where the “quad” of the coalition becomes merely a shouting match between the Lib Dems and Balls with Ed in the middle as a sort of ineffectual father figure, trying to keep his kids from killing one another.

The unions would hate the whole idea of a Lib-Lab coalition for many reasons, but the most prominent of which is that it would immediately dilute their power quite significantly. Also, what the unions fear/hope is that the liberals in Labour want to go off on their own and leave the union bosses and their socialist desires behind to do what they like with them. The warm up to this has already happened, with Len McCluskey talking about disaffiliation and the creation of a new workers party. This threat would be hung endlessly over Miliband’s head the whole time and he’d find himself constantly between a rock and a hard place (I’ll leave you to decide who the Lib Dems are and who’s the unions in that analogy).

What is often not appreciated enough by both the left of the Lib Dems and many Labour members who think most Lib Dems should just join the Labour Party already, is just how very, very, very different the two parties are in terms of outlook and culture. What unites Lib Dems more than anything else is that they are the kind of people who don’t on the whole really like joining things. Frank Zappa, in one of his last ever interviews, was asked if he would join an anti-Nazi league. He said no, stating that “I don’t join shit”. Now, as a Lib Dem, I love that quote; it’s one of my all-time inspirations. Joining the Lib Dems is pretty much the only time I have joined anything in my life because, just like Frank, I don’t join shit. Labour is pretty much all about joining things. You join the young Fabians and then the full blown Fabians, and then maybe you join Progress but then you don’t want to seem to Blairite and so you join Compass, and so on and so on. I’m not putting this down. Labour are collectivists and Lib Dems are individualists. That’s fine, different strokes and all of that. I’m just saying if you try to make these two cultures work as if they were one and the same you are bound to encounter problems.

In the end, whether a Lib-Lab coalition happens will be outside the control of everyone bar the collective voice of the electorate. And if does happen, I will wish all the success in the world. But don’t say I didn’t warn you.