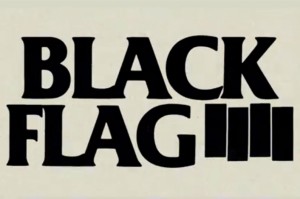 On January 27th, 1979, Black Flag played their first ever show under their new name in Redondo Beach, California. They had formed a few years previously as Panic in nearby Hermosa Beach, a guitarist named Greg Ginn and a vocalist named Keith Morris the main engine of the early group. Although Morris left very early on to form his own band (the almost equally seminal Circle Jerks), Black Flag went onto become perhaps the signature American punk band (although the Dead Kennedys would have a say in the matter).

What’s odd is that Black Flag (much like the DKs come to think of it), often played music that wasn’t all that punk rock. Some of it verges on a sort of idiot savant version of free jazz that is strangely compelling (only to some people, obviously). They took up a whole side of one album that is just lead vocalist by that point Henry Rollins reading poetry, sans musical backup, just one example of their fearlessness. I recall vividly the North American hardcore punk scene in the 1980’s and it contained an impatient group of people who mostly just wanted to hear power chords played as quickly as possible. Yet somehow these same people were always very patient with Black Flag. There was a reason for this, which I’ll outline nearer the end.

The band has a patchy yet brilliant discography. Ginn’s ambition remains admirable, particularly when you read things like Rollins’ Get in the Van, which details the level of poverty even a band as reasonably famous as Black Flag lived with on the road, day after grinding day. There was no money in punk rock in the 1980’s, at least as far as America went. It was too big to get round in and the number of people interested were small, young and mostly penniless. So to throw caution to the wind and do things like recording a whole side of music made up of six minute long Black Sabbath homages, an entirely instrumental EP (The Process of Weeding Out (1985)), and the truly out there Family Man (1983),which contains the Rollins poetry on one side and a free jazzy instrumental freak out on side two, requires either cojones the size of boulders or a fuck-it-all death wish. And yet Ginn always gave the impression in contemporaneous interviews that he knew exactly what he was doing.

The supposed highlight of their oeuvre is their first full length album, Damaged (1981). I use the word “supposed” as despite all of the critical praise heaped on the record, I’ve always found Damaged a little uneven. You have things like “What I See”, which contains the refrain, “I don’t want to live, I wish I was dead”, right next to the joke tune “TV Party”. Perhaps this is intentional, the idea being it’s all supposed to feel jarring as some sort of statement, yet somehow it doesn’t feel like it to me. The album just comes across as a bad compilation a lot of the time. I have rarely ever listened to it all in one go, and one of the reasons I was glad when CDs started coming out was that Damaged seemed made for reprogramming song running orders.

Also present on Damaged is Black Flag’s tendency to verge into self-parody at times, something brilliantly sent up by the Butthole Surfers in the song “The Revenge of Anus Presley” (recorded for Ginn’s label SST, on his request, no less). Having said all this in the negative, Damaged is touched by greatness throughout. Songs like “Depression” and “Room 13” had a formative effect on me, and helped me through some difficult years.

The band’s subsequent releases, particularly My War (1984) and Slip It In (1984), were very influential on grunge in the 1990s; Kurt Cobain listed My War as his eleventh favourite album of all time. But if you really want to know why Black Flag were one of the most loved hardcore punk groups of their era, you need to go back to their early, pre-Rollins work. I’ve patted the band on the back for their experimentation, but when push comes to shove it is their initial, straight ahead stuff that lasts. The EP they did with Morris as vocalist, Nervous Breakdown (1978), is one the great American punk records. It has four songs and the whole thing is about five minutes long in total. Short, punchy, to the point, classic. Jealous Again (1980), with Ron Reyes on vocals, is almost as good. These two, very brief, EPs are a great way to find out what the (admittedly minor) fuss was all about. Another thing to check out is the movie Decline of Western Civilisation (1980), which contains interviews and performances from not only Black Flag, but Morris’ Circle Jerks as well. Unfortunately, the film seems out of circulation at present, although bits of it can be found on YouTube.

Black Flag often wrote songs that were either tacitly or sometimes even explicitly anti-American (“American Waste”), much like most American punk bands of the day. But I think the band is a shining example of a sort of alternate American dream, one that demonstrates everything I really like about the USA: drive, passion, entrepreneurship, determination, individuality. With all of the things I really dislike about America conveniently removed: social conservatism, excessive religiosity, belligerence, anti-intellectualism, wilful ignorance. If only all of America were more like Black Flag, what a place it would be.