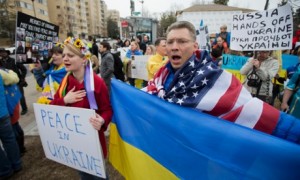 The Crimea. I should have seen that coming. Last Tuesday I wrote about what I thought Putin’s next move would be. And yet I failed to foresee the tactic of taking control of the Crimea, which Russia have effectively annexed now. My folly. It’s one of those things that seem so obvious in retrospect.

The west has responded admirably thus far, with the G7 nations all pulling out of preparations for the G8 summit that is due to take place in Sochi starting June 4th. America has threatened to chuck Russia out of the G8 altogether in hopes of deterring Russia from further incursion into Ukraine. But this may not be enough. In fact, it is very likely that it will not be enough if Putin is determined to try and at least get eastern Ukraine “back”. So I suppose that sets up the question of just how far will Russia go?

Judging by Russian television, we all have reason to fear. Dmitry Konstantinovich Kiselyov, Putin’s media mouthpiece, has been really ratcheting up the rhetoric, trying his best to incite blood lust in the hearts of his countrymen with quotes like this: “I don’t want to offend anyone, but the best that can said for the Ukrainian army is that there isn’t one.” State television also cancelled coverage of the Oscars too. Interpret that as you will. Perhaps it will be his depriving the Russian nation of the chance to watch four hours of interminable speeches from Hollywood actors that will precipitate Putin’s downfall.

If the Russian president does decide to invade eastern Ukraine in the name of “freeing his Russian brothers”, what will the west do beyond the threats it has already made? Not much, and Putin knows this. We don’t particularly have the stomach for a war in eastern Europe. Thinking about it this way, it must be considered strange if Russia doesn’t make further military forays into its neighbour. But Putin should consider this carefully, even if he sees the west as a paper tiger.

For a start, a war between Russia and Ukraine may be incredibly destabilising to his regime in several complex ways. For while the west doesn’t have the stomach for a fight in Ukraine, it is very questionable whether the majority of Russians do either. Putin likes to play the “Ukrainians are just Russians, really” card a lot to try and justify his quasi-imperial designs on the country. However, this cuts both ways; why would Russians want to go to war with a country they identify with that strongly? A prolonged war would also have ruinous effects on Russia’s economy. We’ve had the precursor to this already in the 13.5% fall of the Micex yesterday. Russia’s economy was already facing difficulties; another major blow might see the economy face insurmountable challenges.

Whatever the outcome of a war between Russia and Ukraine, Putin’s grip on power might not survive it. It seems a huge gamble at least, one that he doesn’t really have to take if he looked at things objectively. But that’s the thing; despots don’t really do objective. Not part of the job description. On this, the balance of peace in Europe rests.