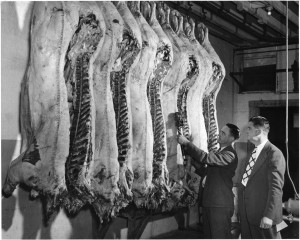 After I lost my job at the strip club, I almost immediately got myself another form of employment, this one very different to sitting around all day chatting rubbish on a microphone while deadbeats watched naked women writhe. This job involved working on the line at a meat packing plant.

If you’ve never done such work, you cannot begin to imagine how grotesque it is. Making sure slabs of dead animal find their way to the correct incision instrument is a fast track to being desensitised to almost everything. Within days of working my first shift, food no longer tasted of anything, all music sounded a bit like white noise, I found no beauty whatsoever in the outside world. It was as if all emotion within me had been temporarily submerged. Having had this experience, I imagine this is sort of how it feels to be a psychopath. It’s not one I’d recommend.

I found most of the guys who worked at the plant almost as horrendous as the slabs of beef coming down the line, so I gravitated towards the one gentile soul of the bunch, a Mexican guy named José. And I don’t mean Mexican as in Canadian-Mexican, of Mexican heritage or anything that grey; José was born and raised in the city of Leon in the state of Guanajuato. He moved up to Juárez when he was seventeen where he worked for about six months before crossing the Rio Grande. He then worked in a meat packing plant in Texas for almost a year. After that he drifted north and just kept drifting. He eventually found himself working in a plant in Minnesota. One of the guys there, who was American, kept talking to José about how great Canada was, how he would love to go and live and work up there. José asked the guy why he didn’t just up and move to Canada himself if he thought it was so fantastic. The guy told him that it’s hard to get papers to live and work in Canada if you’re American; you have to have the right set of skills and even if you do it can take years. Of course, it almost immediately occurred to José that he didn’t have papers to work in America anyway, so he might as well hop another fence and give old Canada a try.

No one in the plant called him José. On his second day working there, one of the zombies (my name for the other guys who worked the line, although I obviously kept that to myself) started giving him a hard time saying that he never thought he’d see the day when he was working beside a real live wetback. Only, José wasn’t really just a wetback. There ought to be a better name for what José was, this guy thought out loud. And then he came up with it: Snowback. It got a big laugh from all of the guys except me, and from then on, it stuck.

“Hey Snowback, how are you finding Canada so far?” one of the zombies would ask him every day, a different moron every day (I wondered sometimes whether they had established an official rota).

“Cold”, José would say, to big laughs every time. I guess he thought it was better to just play along. I can imagine when you’re an illegal immigrant, you don’t really want to make waves with anybody unless you absolutely have to.

The most memorable shift in all of my sordid history of working at the meat packing plant centred on José, and it was also an incident that led to me cease working in said position. It was a shift that started out in a mundane enough fashion. I was about halfway through the thing when there came a loud screaming from another part of the floor. The holler was so horrifyingly otherworldly that everyone stopped working and ran towards the source of the sound immediately. Turned out the scream came from none other than José; he had somehow managed to slice into his right forearm with one of the large saws on the floor. He was bleeding profusely as tendons and sinew lay exposed, jutting from José’s extremely injured limb. He lay on the ground, shaking, with everyone on the floor just standing around staring at him, motionless.

“Is someone going to call a fucking ambulance?” I shouted. As I did several of the gathered zombies took their mobiles out of their pockets. One of them actually then said, “What’s the number for 911 again?”

Mario, the foreman, ran out towards the melee, waving his hands in an obvious panic and shouting:

“No one phone shit! Cells down, now!”

Out of breath, he approached the group gathered around Snowback.

There was silence. Mario put his hand to his heart.

“Thank fuck. Right listen, we need to get the Mexican out of here pronto.”

“But he’s going to die,” I said, “unless he gets medical attention, pronto.”

Mario came right up into my face. His breath smelled vaguely like a corpse.

“Listen, Tyrone, if this illegal stiff gets caught on my floor, this meat packing plant is fucked, you got me?”

Mario then turned to face the zombies, all of them looking more undead than ever.

“Everyone pitch in. Once the Mexican is outside I don’t care what you do with him. But he’s sure as fuck not bleeding to death on this floor. Bear in mind, gentlemen, that if we get shutdown that’s your paycheque down the drain.”

This nod to their economic welfare did the trick. José was lying in the snow, fifty feet from the warehouse exit, within a minute. As this was happening, I snuck out myself, hiding behind a car until the zombies were back inside. I then dialled 911 and ran towards José.

He was looking very bad now. The bleeding had slowed down a little, but his face was white as a sheet. I tried talking to him to make him feel better, but he wouldn’t respond to anything I said, wouldn’t even look at me. I tore off bits of my uniform and tied it round his arm to stem the remaining bleeding as much as I could.

The ambulance took twenty-five minutes to come. When it did, a police car accompanied it. While the medics dealt with José, applying first aid and putting him in the back of the ambulance, a particularly mean looking cop grilled me. He had a shaved head and no neck. He was short, 5’5 or so, with beady little pig eyes.

“So you were just walking along and found the guy lying here, bleeding. That’s your story, son?”

“Yes, officer. That is correct.”

“And you just happened to be walking along wearing work floor whites?”

“I was just about to start my shift.”

“I see, I see. And you don’t know anything about this guy. His name even.”

“I tried to talk to him. I don’t think he speaks English.”

The cop glared at me, hoping to break me down in order to extract further information. I just stared back at him in as blank a fashion as I could possibly muster. He eventually shrugged and handed me his card.

“Call the station and ask for me if you suddenly feel like being more forthcoming.”

Jose José was taken away in an ambulance, probably to face surgery, then a time in the hospital, followed by deportation. When I got back inside the meat packing plant, Mario was waiting for me.

Upstairs, he gave me the grilling of a lifetime.

“Where the fuck have you been for the last half hour?”

“I was waiting outside with José, making sure he didn’t die.”

“Oh yeah? And do you have special fucking healing powers or some shit, huh?”

“I just wanted to make sure he was all right.”

“What’s with your uniform?”

“I used it to stem the blood of blood from his arm.”

Mario put his fingers to his temples, annoyed beyond belief.

“That isn’t your job. Your job is to cut meat, is that clear? I’m docking you an hour’s pay. Now just get back out there and do your fucking work and feel lucky that I didn’t fire your ass.”

I felt angry as I left that shitty little office, as angry as I’d felt in a very long time. As I trudged back towards my workstation I thought about Mario and how he had just acted. And I decided that, fuck it, I couldn’t work there anymore, I just couldn’t carry on, even though I knew I needed the money. I walked past my workstation and just kept on walking, straight out the door.

I headed home, and once there immediately got changed out of my filthy, torn work whites, which were covered this time around in both cow and human blood. As I showered, the blood seeping off my body and down the drain, I suddenly felt elated to have walked out of the meat packing plant job. It had been this albatross around my neck and knowing that whatever happened in my life from here on in I’d never have to work on that smelly, depressing floor ever again was a huge relief.

I looked in my fridge to see what food I had going. I found there some rotten milk and a small amount of mustard. I looked in my cupboard; thankfully, I had a few slices of just about edible bread and enough peanut butter to make a sandwich out of. As I toasted the bread, I put on some music. I can’t remember what it was I put on, but it sounded incredible, like the best music ever made. I applied the peanut butter to the now toasted bread. The first bite was heaven, as if I was chomping into priceless filet mignon. Freedom tasted great.

Then I remembered how I had ended up unemployed again and instantly played back José on the floor of the slaughterhouse, convulsing in agony. Then outside; the blood against the snow. My stomach turned; this newfound return to human emotion had its downsides as well. All of my pleasure in eating the peanut butter toasty evaporated, gone as if had occurred in a previous lifetime, as the horror of José’s fate turned inwards, inevitably becoming self-pity, and I thought about having to find a job again. Freedom tasted bitter all of a sudden.